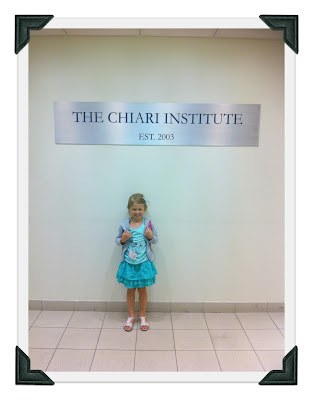 We asked if there were any signs of any related conditions to Chiari… he said her MRIs showed none.

Overall we were VERY pleased with Dr. Rekate, and his staff. Yes, we do still have the appointment with Dr. Carson… but we are not sure if we will keep it. Ben and I are still keeping that option open. There is a feeling I believe one should get with a doctor that you plan on using. I have this feeling with my kid’s pediatrician. I love her; I can never say enough good things about her. And if it wasn’t for her continually checking on Kaylie about her headaches… we wouldn’t be where we are today in all this. My kids like her. And that feeling makes a HUGE difference in the outcome of events. You know… are they going to be around when you need them, are you going to be able to get in contact with them personally… or like how I currently am with our neurologist… I have only spoke with her once… every thing is through the nurse. And I get it, that’s how everyday things are handled… but it shouldn’t be with this. This is serious. This is not the flu, a virus, or any other common illness. Somebody is going to open my child’s head up and do surgery on her brain and skull. And I want that person to be available to me. We have very good feelings about Dr. Rekate. He was so kind, he told us about him and why he moved to New York, and showed us pictures of his grandchildren. He had a real connection with Kaylie… he moved from AZ, to be closer to his 5 year old, blond haired granddaughter, in which he said he couldn’t believe how much Kaylie reminded him of her. Besides looks, her sweet personality, and how she is shy. He reminded me of my father, so compassionate, and caring. And this is the type of person I want to handle my daughter’s 8-hour brain surgery.
Ben and I still have a lot to talk about… this isn’t a decision made on a whim.