I thought today was going to be a good day... I went for a walk first thing this morning, got the kids up and ready, did a few things around the house.... then about 9:30/10am Kay started to have a really bad headache, and running a low grade fever... that comes and goes. Her headaches are daily, and she has learned how to deal with them... but today was a very bad one. I know this because of how often she complains about it, she starts taking lots of warm baths, heating pad is out all day... she spends the day on the couch. I gave her Naproxen, which usually makes it go away for a while... but it didn't work today. She complained even more, about her ears and eyes off and on too. I hate these days.... because there is nothing I can do.

Today in one of my Chiari Oklahoma groups... several people were saying that today has been really bad for them. A few even talked how they thought because the barometric pressure was rising due to storms slowly moving in tonight... was causing all this. So I looked into barometric pressure and Chiari... I guess pressure headaches are noted a lot dealing with barometric pressure. Then I thought about when we were flying to NY how... Kay started with a headache, then the eyes, ears, throat, then nausea... then she got sick! I think it was too much pressure change for her to handle. It worries me a little because we are thinking of flying for her surgery.... its so much faster to fly... but I don't want her to hurt... and even after the decompression.... they say she will have head pain for a while... and that it slowly goes away. I think I will email Dr Rekate more on all this....

On another note... I still haven't talked about the surgery... I am in the middle of writing that post, but in it, I talk about Kaylie's hair... and how some will be shaved, not too much, but with her hair being so thin as it is, I do think it will be very noticeable. So, I found this organization that donates caps/hats for chemo and brain surgery patients. They sent Kaylie 3 hats!! The organization is called Knots of Love. 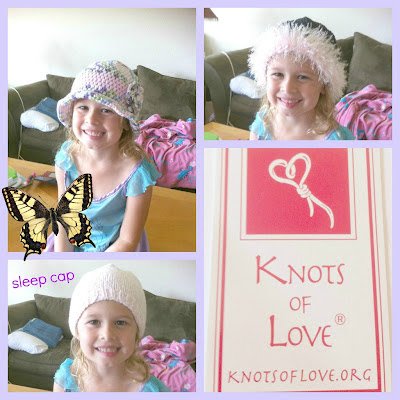 She doesn't know what the hats are for... we think she thinks they are for the winter... I don't even want to deal with that right now! We will deal with that at a later time.
* Cute butterfly...huh?? The first time I put this photo on, I didn't realize her nightgown was hanging a little low!! Love photo editing!
Posted by Amber at 8:55 PM