We don't even leave till tomorrow at noon... and we are already packing!!! We can not wait to get home! I haven't been able to put Kaylie's post-op MRI or Mason's MRI on the blog yet, because my Mac doesn't open up the MRI program that are on these CDs. Dr. Rekate actually had spoke about how on his Mac, he has a special program to open them up. Anyways... Microsoft does, that's how I had been opening them up... Anyways... here at RMH, each floor has a community computer, so I took some time to open them, and email me an image, so I could post them. When I opened Kay's post-op MRI I couldn't believe the difference!! She has Flow!!!! So below is a before & after surgery MRI. 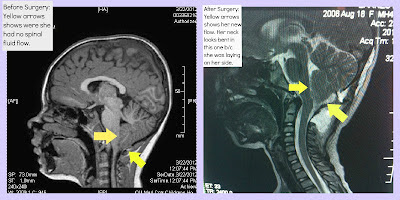 They are different contrasts, that's why Kay's before is in white, and after surgery its black... it means nothing, just an ordering of MRIs. So, I tried to mark with yellow arrows of the biggest differences. There are other areas... but these are the biggest ones.


Now, the next pic below is of Kaylie's (before surgery), and of Mason's MRIs. 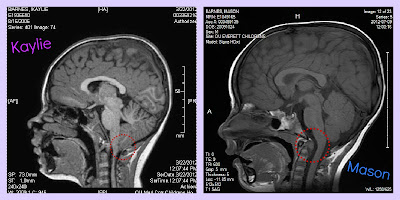 I hope these help explain it all... I actually find looking at MRIs fascinating.
Today, we are just hanging around the house, doing laundry, and packing. Probably will take a few trips downstairs to the playroom later. They have a nice arts & craft cabinet, that Kaylie really likes. Tonight, the RMH gave us tickets to go see the How to Train a Dragon production. So we are going to go "try" to see that. Kaylie gets scared of those types of shows/movies easily... so we could be leaving early from it... hopefully she will like it. Have I told everyone how EXCITED we are to get home!!!!! We can not wait!!!
Posted by Amber at 10:51 AM