I will miss you Barbara....

Kaylie is finally doing better!!! I was actually going to send her to school today, but school was canceled, due to some ice. I think occasionally her throat still hurts, like when she eats, and she did wake up in the middle of the night last night... but Motrin & Tylenol can take care of that.

On another note.... I found out last night a dear friend past away. I had just met Barbara in person back in August. She went to my church, had heard about Kaylie, followed her blog, and sent cards to Kaylie. It wasn't till I announced that I was starting the Oklahoma Chapter for American Syringomyelia & Chiari Alliance Project (ASAP), where we got to know each other better. I have talked about her several times in past posts on here. She had Scleroderma, which is a condition of hardening of the skin. She was on O2 because of it. She was very involved in her Chapter here in Oklahoma for the Scleroderma Foundation, www.scleroderma.org. Even though I only knew her for a short time, she made such an impact on my life. She taught, and showed me how to fight for Kaylie's condition, and that it can be done, that we can better inform the medical community about these conditions that are not spoken or seen that much of.  Kaylie & I had attended Anointing of the Sick sacrament one Saturday evening with her. It was very emotional for me, in fact I have never taken Kaylie back, because it was so hard. She understood why it was hard, she understood my thoughts on dealing with this chronic illness... my worries, my fears. Don't get me wrong, I'm glad we went, it was beautiful. It was just hard for me, because Kaylie was the only child, and it put a lot of things in perspective to me.
I just wish I could have said good bye, or tell her again how much she meant to me. R.I.P. Barbara, you were a beautiful lady!!! 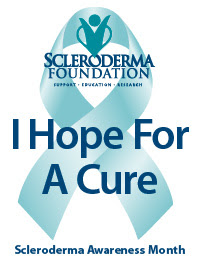