It's a Purple Cupcake Kind of a Day!

Today is a Happy Day, enough so, that we will be celebrating with purple cupcakes!!!

Wow! Can you believe a year ago today, I was giving many kisses to my daughter, as my husband walked her back to an OR room. Then I sat in the chair and cried…..
Last July 27th was the longest day of my life; hours felts like days and the waiting grew tiresome. But she made it through, and what’s even better than that is we are celebrating her 1 year post-op surgery! What a year it has been…. I knew we would get through it, but man… it was a long one. I am also happy to say that Kaylie has not been sick for 6 mths straight!! That’s a first for us. 6 months after her decompression surgery, Kaylie had her tonsillectomy… that surgery helped a lot!
Kaylie is doing so well! She doesn’t have nearly as many headaches as she use too, no ear pains or eye pain. She still has some issues with memory, which she will have some testing done in Sept on that, and she has had some eye issues, that seem to be under control right now, we are watching those issues carefully. Kaylie went to summer school this year, to try to help catch her up from all the school she missed. I think it helped some, but not as much as I was hoping for. Over the summer I have been working with her on reading, and a summer bridge workbook too. But after a lot of thinking, Ben & I have decided to have here do 1st grade again. The school is very supportive on this decision; in fact I believe they think it’s for the best as well. I think I am more worried about it than she is, in fact she says she is ok with it. We had new neighbors move in across the street, they have a little girl Kaylie’s age, who will be going into the first grade this year. They have become good friends, and I have asked the school if it was possible that the two girls be placed in the same class…at least this way Kaylie will know someone. We will see what happens. Either way…. I think this is the right thing to do.
I still get contacted a lot though Kaylie’s blog. And recently I was speaking to one of the moms; our first phone conversation … and she said something to me… that is probably true about a lot of moms in the situation I am in. She told me, “I noticed you haven’t wrote as much on your blog as you use too… so I figured Kaylie was doing really well….” She is right. I don’t write as much as I use to, because there is nothing to really write about. Kaylie is doing very well. I keep in contact with Dr. Rekate, and recently he reviewed her Nov. MRI (3 months after her surgery), because it looked so good, he feels she does not need a MRI right now. She will probably have one next year. I am very content with this, in fact happy… there are not any other words to say except that she is doing great! 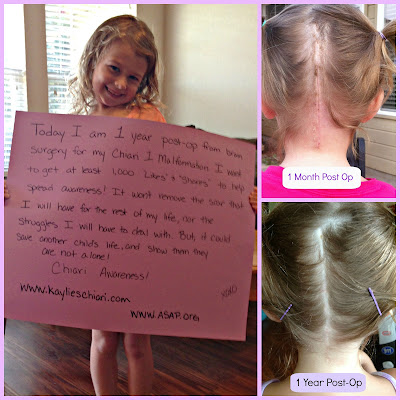 Kaylie’s scar looks GREAT too!!! Don’t you think?? This pick was posted on my facebook…. Not only to show how well she is doing, but also the sheer need of awareness! I continue to be heavily involved in The American Syringomyelia & Chiari Alliance Project, leader of the Oklahoma Chapter. I’m hoping next Spring to bring the first ASAP walk to OKC, and continue my efforts in showing support to patients and more education to our medical community.
If there is one thing I could tell every parent and even adult patients out there starting this journey, is to find the right doctor for you and your family. One may be great for me, but not right for you, and vice versa. Being comfortable and trusting your doctor is so important.

We like to Thank all our friends and family that have always been there, and never left our side. We Thank the City of Moore, and surrounding cities for your generosity, prayers and good will. We especially Thank The Moore Police Department, for they are our second family, and always will be.
Posted by Amber at 9:03 AM 0 comments

Having a blog is so therapeutic for me. I use to utilize it a lot, mainly last year, but now... I don't have as much to write about, or at least I don't think I do. I think there is a tad bit of me that is scared to voice what I am thinking now days.... its not the worry anymore about Kaylie, or my family in general, my thoughts are more about ...kind of things that drive me crazy, in the chiari world.  lol I know I have a lot of emotions built up... and I should be writing more... I have often thought about starting an anonymous blog about life in general... but one blog in my busy life is enough to handle!!

There are two chiari patients in NY right now getting treatment... one of the moms I have become very close with... I feel like sometimes we have to back each other up, because we chose to see better doctors (in my opinion). The other one is new, and I'm just getting to know her. The newer one's daughter had surgery today... there was a complication, where they ended the surgery, to get a handle on this other health issue.... I have been reading her Caring Bridge... and everything she wrote brought back so many memories... ones we faced literally almost a year ago. I have been struggling a lot lately, I would say for the past 4 months, being so emotionally involved with some of these patients.... mainly the kids, and parents... probably because I can easily relate, and remember being in that position. I feel like I go through these highs and lows with being involved in the chiari community. Something good will happen, for an example: we have a new neurosurgeon coming to OKC, that has worked with the TCI docs in NY... so he will really know chiari, and I have been in contact with him... so I have this "high" of things are going to change in OK, and other neurosurgeons are going to understand this condition a lot better. I have a doctor willing to get involved with ASAP here in OK.... it makes me feel great, that a difference is really starting to happen... that putting on all these meeting, are not for nothing. But then a "low" will come ... where I will watch friend's child go through the ringer dealing with this condition.... or like today, the problems with the surgery with that child being so out of whack... that I just wished I was not involved anymore... so I wouldn't be emotionally attached to these people. No one tells you that part of all this.... the part where you worry about other peoples kids... worrying that it could be your child one day, or sometimes the guilt you feel because your child is doing so well, and others are not. I know I should never feel guilty because Kaylie is doing well.... but it upsets me to tell others when they ask... yes, she's having a great day, or has been doing so well.... when their child or them are suffering so bad. I'm a fixer... and when I cant help, or fix the problem... it frustrates me, I feel like I am in limbo with things.
So... with all that said, I am going to try to start blogging more... I'm serious this time, I know I have said that... how many posts??? Let's don't count! Tonight I am going to start with my anger about a post that was in a FB group.... how a doctor told a parent that children under 6 grow out of chiari.... I didn't even get through the whole post, b/c I was so mad. Not at the parent who posted it, but at the doctor that said it! I am really hoping it was a miscommunication, because if it isn't... just means awareness is that much more needed! All I could think about was all the littler kids in my groups that have all had surgery... one as young as 18 months.... it just kind of sounded like we as parents put our kids through this horrific surgery for no reason... like we should have waited for them to grow more. I know I can easily say, along with the rest of the parents I know... if we would have "waited" I don't know where we would be at right now. How much more Kaylie's brain would be damaged, or all the nerves that are dying off, because they are so compressed... or even brain tissue, from being overly crowded. It's a scary thought... but that where I as a support group leader urge patients to get more than one opinion, regardless how well you think a NS knows this condition. But... I don't know why I am so surprised... b/c one of the biggest things I hear from adults in my groups, is how long it took for them to get diagnosed, or correct treatment... b/c it took them that long for a doctor to figure things out. And this is a scenario where it gets my blood boiling to a "high".... to keep doing everything I am doing... this is why awareness, and support group meetings are so important. 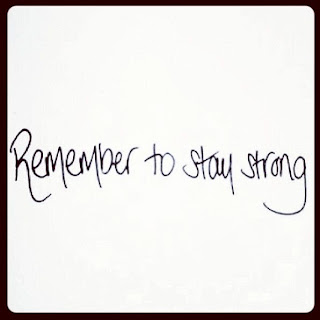 P.S.~ if you pray, say some extra ones for the two chiari warriors in NY right now, they could really use it!
Posted by Amber at 2:49 AM 0 comments