On the road again...

Headed North, yes right into Hurricane Sandy! Kaylie has a MRI just to recheck everything. And Mason is having his flex/extension MRI so we can figure out more on his condition. We don't have to be in NY till the 1st, so we are going to stay in Philly with Ben'a family during the storm. Hoping we will be able to head in afterwards. TCI called me the other day to confirm appt. so things are still a go.

On another note: some know that Kaylie has been sick this past week. She was fighting, we guess a bad virus again. She had a sore throat, really high fevers, just not feeling well. We took her twice to our pediatrician, who ran strep swabs and culture... Both were negative. It lasted all this past week. She is doing a lot better, still has a cough here and there... But for the most part on the mends!
We will keep everyone updated!! 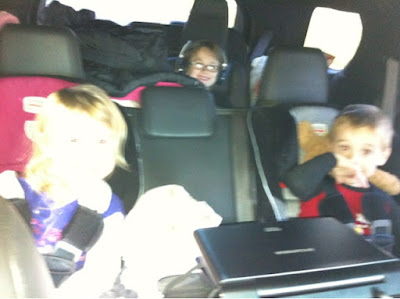 Happy Birthday to My Little Boy!

Today Mason turns 3 years old! I can't believe my last baby is growing up. We celebrated a couple weekends ago with my family, just because this week was so busy for us. 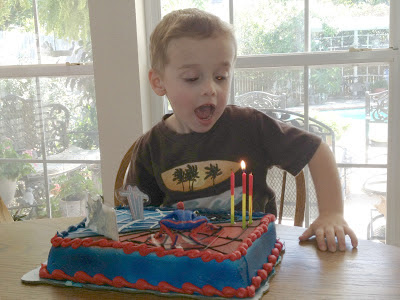 As it has always been on the back of my mind, as the time gets closer, I am starting to worry more. Mason will be having a Flex/Extension MRI to help let Dr. Rekate know more about all this Basilar Invagination is. Basilar Invagination is also called Cranial Instability, Retroflexed Odontoid, and/or Basilar Impression. I am shocked at myself that I have not wrote out all my questions for Dr. Rekate on this. They are all sitting in the back of my head... and I plan to write them all down during our drive.
I really have so many thoughts running in my head, and as much as I want to share them on here, for some reason I have been holding back. I think I just want to talk to the doctor first before saying my thoughts.
Anyways... I think I will go bake my little monster a birthday cake for today!
Posted by Amber at 11:04 AM 0 comments

Sorry it's been awhile, the past couple weeks have been really busy.

A PA from Duke University came out about couple weeks ago... our family is in the Chiari 1 Malformation Study. They took blood from all five of us, we signed some release papers, answered a questionnaire and that was about it. All though we won't see the benefits of all this.... maybe my grand kids will never have to go through this. To learn more about the Duke Study please go here.

I started back to school, this past week. Just the one online course.... Overview to Nursing. I registered for the Spring semester, I decided to only take two classes.... retaking the Anatomy & Physiology class I had dropped, and will also be taking Dev. Psychology. I am really glad to get back into school.

So Kaylie hit the 3 month post op mark!!!! No there was no party... but I was still excited to pass it. She has been doing really well! Back to school full time, she is playing at recess with the other kids, and her academics are good too! I don't have her in her PE class, she just takes an extra music class. I want more healing time to pass before she gets back involved in that. We have noticed a few little bumps in the road, nothing bad... I really just things that she will deal with for life. We have noticed with weather change the back of her head will start hurting a little. Also i have noticed when ever she has been playing hard, like running around... her incision gets really pink looking. I try to tell her to take it easy, but she knows she has to watch out for her head, thats what we say. She does a good job of that. Abby accidentally elbowed her in the back of her head the other day.... she hurt the rest of the night after that, but was fine the next morning. 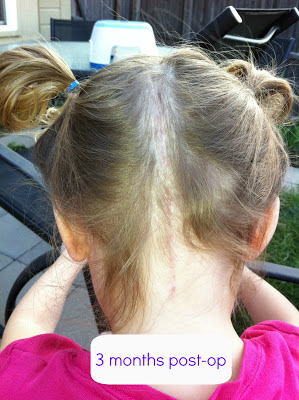 It's looking good ...huh?? The hair is growing in, it does look a little pink here... but she had just come home from a friends house playing all day. That little bottom end part always seems to be the pinkest area... but if you look at it, or rub your finger over it... you can feel a suture underneath that is trying to work its way out/ dissolve.

We leave soon to go back to NY. Kaylie will have a MRI to recheck everything, and Mason will have his Flex/Extension MRI. Then we will meet with Dr. Rekate the following day to see Kay, and talk about mason's condition. We are excited to go, we will see some of Ben's family in Pa too.

This past Saturday, I held the first Oklahoma Chapter Support Group Meeting for American Syringomyelia & Chiari Alliance Project. It was great!!! I had 15 total there. I handed out information, talked about my goals for the group and everything else. I think it's going to turn into a great Chapter, that brings a lot of awareness and education to Oklahoma.
Posted by Amber at 10:08 PM 0 comments

All in the Family...

It has been a crazy couple weeks. I think a lot of my emotions, like breaking down during my speech at the the CC Walk, and at church this past Sat. evening, have a lot to do with things that have been on my mind... and I had just not been writing, or telling anyone about. Ben went to see our pcp about a month ago, for headaches... Ben has always had headaches, I think I have just never noticed how much, because I just never paid a lot of attention to it all. But When Kay was diagnosed, I was watching everyone... a little closer. Started noticing that Ben would take Tylenol, Aleve, or Advil... about 4 to 5 times a week. I would ask him about it... and he would play it off, or just say it's all sinus related. I kept asking him to see a doctor... not for the fact of possibly having what Kay has... but if they were at least Migraines, he could get on a Migraine medication or something better to help. He kept saying no... but then after Kay's surgery... I told him I really thought he should... too many happen in a week. So we went to the pcp, talked to her about it all, and about Kaylie's situation... she decided to go ahead and do a brain MRI. We got the scans... and sent them to TCI. Ben said, whatever the outcome, that he really didn't want surgery... that he rather try medications, because he wants us to focus on our kids right now. I told him I would support him either way. So, the scans were suppose to go to Dr. Kula... the neurologist up there. But the scans are always reviewed by all the doctors together at one time. A few days before the CC Walk, we were contacted by Dr. Kula's secretary, they wanted Ben to set up a Skype appointment with Dr. Bolognese (a neurosurgeon). They would not give us any other information, just wanted to set up the Skype appointment. The appointment was made for Oct. 2nd. So many thoughts went running through Ben & I's heads... we were worried. The walk came, and we put on a smiling face, as I met others at the walk, I could only think of one thing that entire day. I really think that is why I broke down in my speech.... I just couldn't handle it all. Days went on, during our wait. There was even a couple days I saw my mom, and I could tell she knew something was bothering me. But I never lead on. We didn't want to say much, until we had all the facts. This past Monday came, at 2pm we waited for Dr. B to call in. We chatted for a couple minutes about things, then he put up the MRIs on the screen, still being able to chat with us via Skype, and point out areas of the MRIs he was showing us. (Which by the way, I have never seen Skype used like this... and was in amazement of the technology, being able to do that!) He said that Ben had a mild case of Chiari/ low lying tonsils. Ben's herniation is 4.1mm. He said that there was a partial blockage, but nothing severe. He said that surgery is NOT needed at this time. But, wants Ben to repeat MRIs yearly. He would like Ben to try some other therapy options before being put on medication. He wants him to keep in shape, work on good posture, loose some weight, look into any food allergies, try cranial massages, and/or acupuncture. If some of that doesn't seem to work with Ben's symptoms, and headaches, then we would talk later about a medication called Diamox. What he explained is it's a medication that helps with spinal fluid flow. We then talked a little about what links Ben, Kay & Mason, and talked a little about us coming up North in Nov. to see Dr. Rekate again too. That was about it.
We have kept this quiet, Ben really wants to focus on the kids, and we will work together to manage his symptoms. We are very thankful that it is not nearly as severe as Kaylie's. Kaylie's situation was a no choice issue... she had to have surgery, she was completely blocked. Things for her could have gotten a lot worse.

With all this said, we have talked to Duke University. They are currently doing research on Chiari 1 Malformation. They are coming to Oklahoma this weekend, to talk to the families here that have more than one member with Chiari in their family. Here is their Face Book link on the study. Here is their website for it. They will be stopping by our house Friday at 3pm. I think this is very important. All though it will never benefit us 5 personally, but by the time my kids have kids... their could be new research about genetic links in how to have better treatments, prevention, or maybe even a cure. We are doing this for future generations.

We will be fine with all this new info, and God doesn't give us things we can't handle. I have to trust in him.